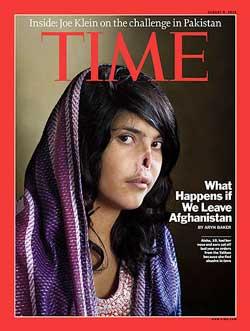 In August 2010, Time Magazine published a graphic cover photo of Aisha, an Afghan woman whose nose and ears had been cut off by the Taliban. What was their defense of showing this disturbing image? That it conveyed an even more disturbing reality: Managing Editor Richard Stengel wrote,

…bad things do happen to people, and it is part of our job to confront and explain them. In the end, I felt that the image is a window into the reality of what is happening—and what can happen—in a war that affects and involves all of us. I would rather confront readers with the Taliban’s treatment of women than ignore it. I would rather people know that reality as they make up their minds about what the U.S. and its allies should do in Afghanistan.1

And what was this 18-year-old’s “crime”? She ran away from her husband’s house because her in-laws beat her and treated her like a slave. She feared she would be killed if she did not flee. Tragically, she was found, and while her brother-in-law held her down, her husband mutilated her face.2

As pro-life leader Gregg Cunningham has noted, “Some acts are so horrific that words fail us when we try to convey their horror.” That applies to the brutal mistreatment of people like Aisha, and it also applies to the horrific slaughter of pre-born children.

With abortion advocates fearing the effectiveness of such imagery, that is a good sign for pro-lifers to use them. And so, CCBR has developed projects that reveal photographic evidence of abortion: during presentations, “Choice” Chain, the Genocide Awareness Project, and the Reproductive “Choice” Campaign. Indeed, when pro-lifers do display the visual reality of abortion, minds are changed. 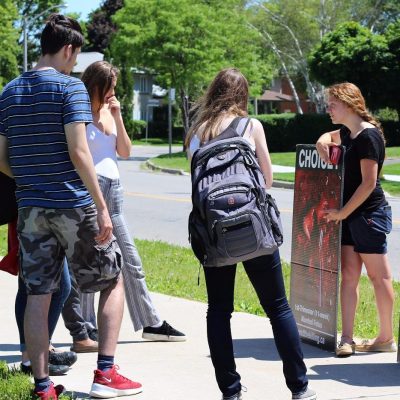 From the Abortion Awareness Project:

In the fall of 2007, I saw the GAP display at the U of C. Prior to seeing this GAP display, I had decided that despite my Roman Catholic upbringing and pro-life roots, I was going to be pro-choice. I was a university student now, why shouldn’t I have an open mind? I remember talking with some girls in my dorm, and even going as far to say that if I were to get pregnant now, I would without a doubt obtain an abortion. I thought that, medically, abortions were more safe than delivering, that women had a right to choose when and when not to be pregnant, and that if something was legal, it was obviously justified.

Walking by the display, I felt anger—extreme hatred and disgust. These feelings were so intense, and I had never felt so much hatred towards a group of people that I didn’t even know…

Seeing the display for the second day made me even angrier. I actually remember being so angry that I felt sick to my stomach, like I had to vomit. I thought it was disgusting that people were allowed to do this, to impose their viewpoints on others, to display graphic pictures of a medical procedure and to ‘proselytize’ their church’s stance on abortion. Going home that night, I couldn’t sleep. The pictures of the dead and alive 24-week-old fetuses haunted me.

Throughout the next few days, I prayed and prayed and prayed. I hadn’t prayed once since I came to university. Through prayer, I came to realize that why I was so upset and so angry about the GAP display was not because I hated the people that were talking about abortion, it was because I hated abortion. In my heart, I knew abortion was wrong. I knew pregnancy involved two lives, and I knew it shouldn’t be a woman’s right to end another being’s life. I knew I had to get involved with pro-life; I knew that it was my moral obligation to speak up for the unborn who don’t have voices. I’m now happy to say that in the spring of 2008, I was a volunteer at the GAP display at the U of C campus! –University of Calgary student

From the Truth Truck:

One man who saw our truck decided to call us. This was his voicemail:

…I was just calling about your truck campaign ’cause I just saw a truck while I was in traffic, and, um, yeah, the images actually [are] really, really startling and, and unpleasant, and, you know, uncomfortable to look at. And I originally called to, um, just, yeah, let you know I didn’t appreciate it at all, but after listening to your message [the RCC voice-mail greeting at 403-CHOICE-1] and, um, yeah, thinking about that during that time I actually just wanted to say ‘Good job.’ So, um, yeah, … that’s all I have to say is, um, job well done! You are going to spark a lot of dialogue out there about exactly what’s going on…. Good job. Bye. –Voicemail left by man who saw the RCC

Indeed, the pictures do spark a lot of dialogue, and they compel people to reconsider their views on abortion. As a woman in Nova Scotia wrote,

“I am pregnant with my 3rd child and in my circumstances I was considering an abortion. I can’t believe I even considered it after looking at this [abortionNO.org]. The years will pass and my child will be a contribution to the world, no matter how tough it is to get there.

CCBR has many more e-mails, surveys, and personal stories of people who have changed their minds on abortion. As difficult as these images are to see, it is indisputable that they are effective in making abortion unthinkable.

Finally, the following reflection by Dr. Martin Luther King, Jr., in his “Letter from Birmingham Jail,” is very insightful when considering pictures in pro-life activism:

Like a boil that can never be cured as long as it is covered up but must be opened with all its pus-flowing ugliness to the natural medicines of air and light, injustice must likewise be exposed, with all of the tension its exposing creates, to the light of human conscience and the air of national opinion before it can be cured.