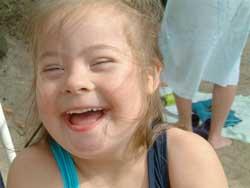 Certainly physical and mental disabilities bring with them great challenges for those with such conditions. Though we should certainly aim to alleviate their suffering, we should not eliminate the sufferers.

What kind of a society would we create by killing off sick or disabled human beings? We just need to look at the Nazi euthanasia program for our answer, as sick and disabled children and adults were deemed lives unworthy of life.1 That lead to a world where the inherent dignity of each individual was disregarded; instead, individuals were valued based on what they looked like, what they could do, or how those in power felt about them. The result? The widespread discrimination, rejection, and killing of the weak and vulnerable.

Today we have hospitals instead of killing centres because we believe in killing the pain, not the person. Those with limitations have a right to life just like so-called “normal” or healthy people.

In other words, we recognize that those of us who may die later do not have a right to kill those who may die sooner.

This should also be true for the abortion debate. Certainly, being told one’s pre-born child will die shortly after birth is a very tragic reality (but not always accurate). There is, however, a world of difference between a death through natural causes (and no fault of ours) versus a death that results from a direct, intentional act we commit.

This is a news story about a couple whose pre-born son, Thomas, was diagnosed with Trisomy 13, a rare and fatal DNA abnormality, at 20 weeks pregnancy. They nonetheless embraced his short life, carrying him to term and enjoying his presence for 5 days after birth. Thomas’ mother said, “I think sometimes when you make the toughest decisions you can get the greatest joy out of those. We didn’t terminate because we were hanging on to some sort of hope that there was a medical mistake, or that there was going to be some sort of medical miracle. “We didn’t terminate because he’s our son.”

This is a life-affirming alternative to abortion for pre-born children and infants with fatal or serious defects.

External Link: No Limbs, No Limits

This is a 60 Minutes Australia interview with Nick Vujicic, an international motivational speaker who was born without arms and legs. His story of turning this great obstacle into an opportunity provides inspiration for alleviating suffering without eliminating sufferers.

Back to Circumstances of a Crisis Pregnancy