Implantation starts at the end of the first week after fertilization, and is complete at about two weeks.1 Some argue that this is where life begins. But implantation simply marks a change of location (from fallopian tube to uterus), rather than a change of nature. The human being prior to implantation is the same as the human being after implantation (just like before and after birth—another event marking a location change). 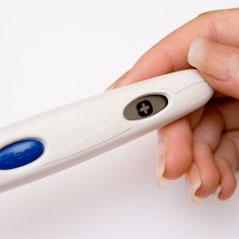 Take, for example, the commonly used hCG pregnancy test, one which looks for Human Chorionic Gonadotropin in a woman’s urine. hCG is a hormone that is secreted by the developing placenta, and this occurs at implantation.

The release of hCG indicates the presence of the pre-born child, but it doesn’t mean she didn’t exist prior to that. We know this intuitively, of course: Just imagine you enter your home and find a stray puppy hiding in your bedroom—but you only discover it after you’ve been home for 30 minutes. Clearly, the puppy did not enter your house when you first discovered it, but instead when it managed to crawl in.

Likewise, one’s offspring first exists at fertilization even if we don’t discover her existence until implantation.